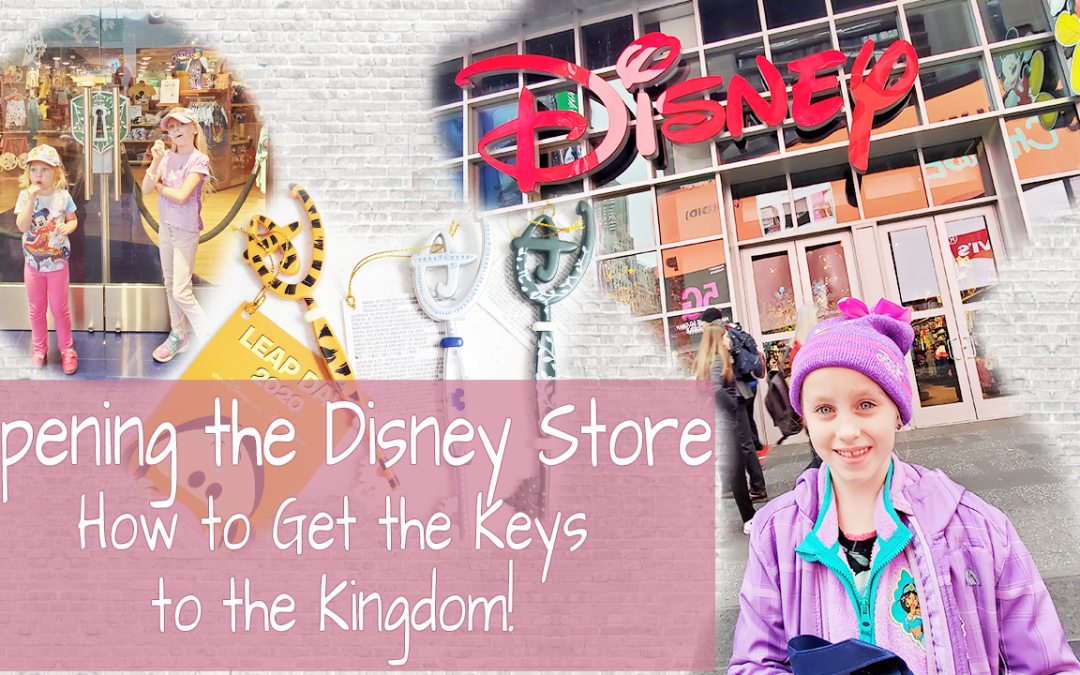 As a die-hard Disney nerd, I was surprised to learn that I could find some real Disney magic outside of the parks by opening the Disney Store.

I don’t even remember how I stumbled across this little nugget of information. Somewhere in the corners of a Disney fan page or Pinterest back alley, I gained the knowledge that any ol’ person can help to open the Disney store!

You, me, anyone can be chosen to wake up the magic needed to run a Disney Store!

I just had no idea this was a thing but knew I needed to try it for sure! First, let me assure you this is real and it does work! We have attempted 4 store openings and succeeded at 3. The miss being a special release day I had no idea about!

Scope out your nearest Disney Store, know their hours. We don’t have any Disney Stores particularly close to us but we do have 3 actual stores and 2 outlets within about an hours drive from home. We regularly trek this far for fun things so no big deal in my book! When you know their hours, and if you are skilled at rope droppin’, you know you need to arrive BEFORE opening!

I recommend and have had luck arriving 10-15 minutes prior to posted opening time.

Then, you hang around and loiter in front of a dark store in a mostly empty shopping area. I usually stay near to the door and let the kids peek through the windows for workers or things to get them excited to go in and see. With the exception of the day we were not chosen, I have never encountered anyone else waiting at this time. I have, however, had quite the line form behind us as the opening time got closer.

As opening time nears, you will see some activity in the store.

You may also notice that there is a rather large decorative lock posed just inside the door. Some have velvet ropes attached. Any lights are turned off and a cast member comes to the door. They come out of the door and ask if anyone is available to help turn on the magic. I encourage you to encourage your kids to not be shy and to volunteer quickly. I think that the cast members can choose anyone waiting and enthusiasm wins! So does a thin crowd or being the only kids present.

We have always had great interactions in Disney Store. Just like in the parks, the cast members seem so happy to be working there. It truly creates a warm fuzzy feeling and I am happy that I can get just a piece of that near home.

Back to the Magic

While each opening experience has had some differences, they are all variations of the same process. They choose a kiddo to help them recite some magical words. “Bibbidi Bobbidi Boo” seems to be the favorite. They get the kids to use their magic, countdown to magical words, and suddenly music plays and the store comes alive with light. It really is a great feeling! The lights come on, the music fan fares, and ropes drop!

Just like magic, the Disney Store is open for business!

During normal times, the regular Disney Store presents the chosen opener with a decorative and collectible key for their troubles. I knew that the Disney Stores would all be closing the following day and wanted to squeeze in a fun outing since all of our normal fun things were also in some stage of closure due to the Covid-19 outbreak. We naturally headed to the Disney Store. Part of this was to do a scavenger hunt and part was to ensure that my birthday girl got at least a few special memories during this time!

Since there was an outbreak of unprecedented severity, Disney was taking all of the necessary precautions. No key or lock to touch! Conveniently the magic had been stolen by the Dark Side and my girls were able to use their well-practiced Force Push to rescue the magic and restore it to the store.

Worth saying that there was no take home for this opening, understandably.

We recently traveled to New York City on an extended layover heading toward Paris.

Since we didn’t have any concrete plans and only a little over 24 hours in the city, I knew that visiting Times Square and the Disney Store there would please my girls. Unfortunately, our plans were slightly derailed by a sick sleeping baby so only one princess was in tow. We made the best of it, divided and conquered as best we could!

Times Square Disney Store had the largest line behind us and the 15-minute rule proved its worth. This was by far the best opening procedure! In the shadow of Broadway, there is a full song and choreographed dance!

Also, this is the best souvenir key! So this was our miss! We hadn’t planned to go to open the store until our plans changed the morning of Leap Day. We figured, hey let’s shoot to open the store! Poor Paul has never had the chance to witness this magical event. We arrived early, like seasoned pro store openers.

There was a crowd! I immediately realized there must be some kind of special release merchandise. My princesses were not chosen to open the store and were naturally sad. I always warn them that it is our goal, but I can’t promise we will be chosen.

We stayed to shop anyway and got to witness the outlet store procedure.

Same magic and countdown, instead of a lock there is a box with a Sorcerer Mickey book on top. The chosen kiddo receives a sorcerer hat to wear and to keep.

I think the kiddo was also given a Tigger Key but I think usually the take-home gift for the outlets is the felt hat.

10 Tips for Opening the Disney Store

We have several of the opening keys in our house. One day I googled them and turns out people are reselling them on eBay! I was completely shocked at some of these prices but have now chosen to better store the keys. Please share your experience Opening the Disney Store in the comments. We talk about the cost of homeschool curriculum a

I feel like I have been talking my way around this

@knowledgecrates are the gift that keeps on giving

I got this question from a viewer and I thought th

Technically this is only my thoughts on the first

I have compiled quite a list of holiday gift ideas

Got fun busy and forgot to share what we have goin

ARTEMIS 1 has launched and our journey to get back

These are the rules that we run our homeschool by

This was a request video, more day in the life con

Reminder that there's no right way or place to hom

It is National STEM / STEAM Day! I think that many

I hope the that the time change is treating you we

We haven't had a random way too long chatty video

Had a great time making this confetti pumpkin cake